Welcome to the Quilter's Academy Journal

Hello!
Harriet and I are glad you visited... we established this blog as a sort of question and answer forum for all of you who are working through the Quilter's Academy book series.
It is also a place to find a list of the errata from the books-
You can find those by looking back through the archived blogs.
So, welcome, and please post a comment if you have any questions or topics you would like us to discuss.

Long time no posting! Harriet and I are apologize for our silence this past year- things have been a little nutty!!
So Volume 3 of Quilter's Academy was released this spring to great reviews and we are excited to announce that Volume 4 will be available May 2012- so look for it in your favorite quilt shop next spring!

As there have not been any recent emails or posts giving Harriet and I something to write about we have been pretty silent, but we just had a pancake breakfast and show and tell at our store this past weekend (October 21, 2011) and one of our local students who is working through the series on her own at home came to show her work at the show and tell and we wanted to share her work with you.

Debbie is currently working through Volume 2 of Quilter's Academy. She is an experienced quilter but wanted to refresh her memory and improve her piecing skills.
With that as her starting point, she has been taking the projects that we assign in the books but adding her own spin to them....
Like in her rendition of the "Card Trick" quilt from the cover of Volume 2. Debbie was going to do the card trick block, but them found the pretty yellow... it didn't look so great as a large piece 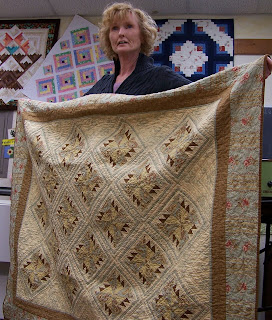 in the card trick block, so she found another block with the same feeling as card trick but that allowed the pretty yellow to shine- between her block and the great window paneing she has made the quilt all her own... here are her results:

For her next project she worked on "Confetti", but for her, a table runner was more useful. 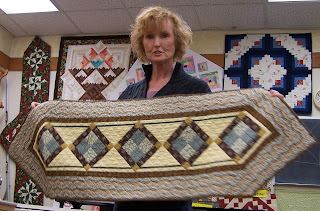 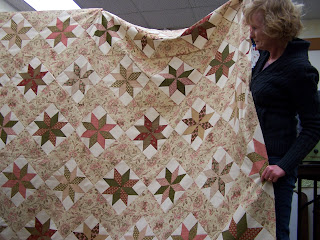 And finally, "Navajo Dreams". Debbie chose to use LeMoyne Star blocks instead of the album blocks Harriet used in the project quilt, but look at the result.

Thank you Debbie, for the inspiration!

Debbie, and many other "home school" students are going gang busters with their projects and we are so proud of all they have accomplished- especially in the the "thinking outside the box" element we encourage in the books!

Debbie's quilts are a great example... so you like the layout of one of the project quilt, but aren't taken with the colors, the blocks... whatever... use the skills you have learned in the books and create your own.

Remember, post your comments or questions and we'll answer you, here on the blog (if appropriate) so everyone can learn from the question.

Keep quilting and we'll look forward to hearing from you!
Harriet & Carrie
Posted by Harriet and Carrie at 11:04 AM 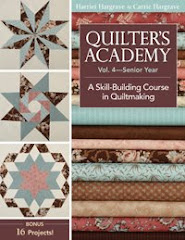 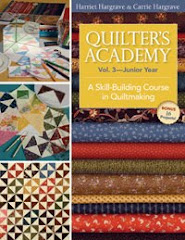 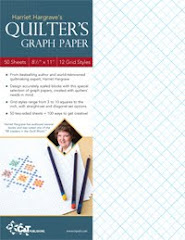 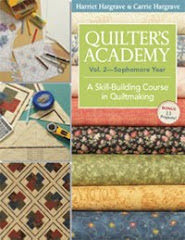 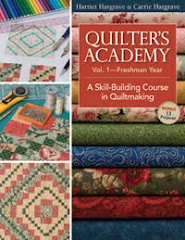